Experienced lawyers for people who get hurt at work

A 57 year old plumber who was pinned in a trench for 20 minutes and suffered pelvic fractures, back, shoulder and urological injuries won a $1.1 million jury trial award in Essex Country Superior Court.

On October 9, 2004 a plumbing laborer was working on a $700,000 residential construction project at on Hillcrest Road in Warren, New Jersey. The general contractor on the project was DAR Construction Company (“DAR”). DAR hired plaintiff’s employer, Freitas Plumbing to install a 700 foot sewer line from the street to the house. This required the digging of a 700 foot trench that varied in depth from 4 feet to 8 feet. On the last day of the project, the worker was in a 6 foot trench when it suddenly and without warning collapsed, burying him to his waist. He was pinned for 20 minutes. 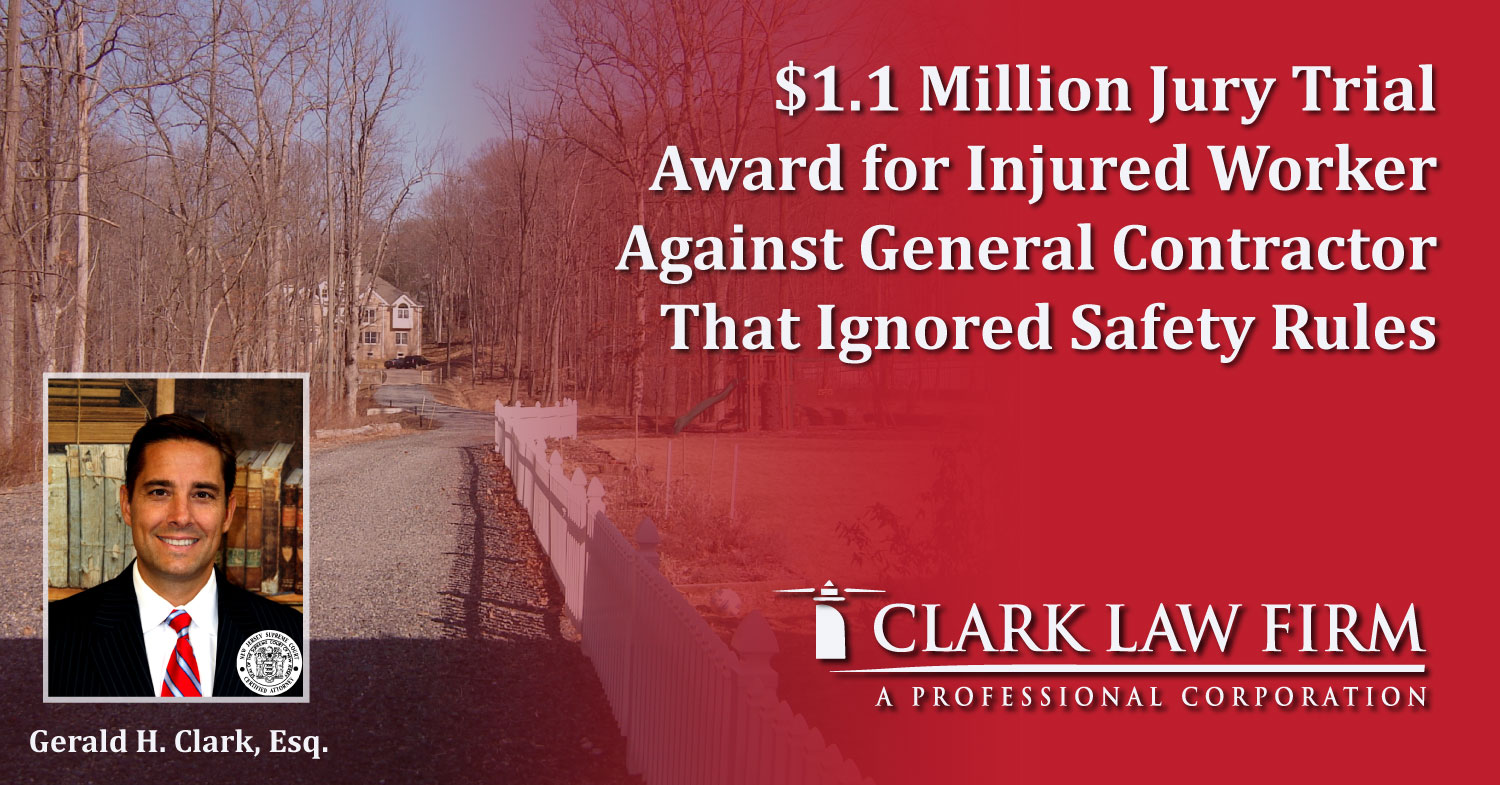 The workers attorney, Gerald H. Clark, Esq., of the New Jersey personal injury firm, Clark Law Firm proved that under the law the general contractor had a non-delegable duty to manage safety and enforce the federal OSHA regulation on the project, which Clark argued, required the trench be protected from cave ins. Counsel for the general contractor argued its client acted reasonably and had the right to rely on the experience of its subcontractor, Freitas Plumbing.

Clark presented testimony that DAR and Freitas had worked together for many years and rarely if ever did they require their plumbing trenches be shored to protect workers. Clark showed that DAR and Freitas had a practice of not following OSHA regulations in order to speed up the jobs and maximize profits including through the following testimony from the DAR project manager:

Mr. Clark: “Making the job move fast and maximizing the profit is more important to DAR than worker safety, isn’t that right?”

Project Manager: “To speed up the work and maximize profits, is that what you’re asking?”

Clark argued at trial that the actions of the general contractor in not enforcing the federal OSHA regulations was outrageous. After the worker was in the trench, his employer drove him home and then picked up his son from another work site, and had him take his father’s place in the same unprotected trench that had just severely injured his father.  The son was not told what had happened to his father. Clark also presented the testimony of another witness who was required to work in the 8 foot section of the same unprotected trench weeks later. The trench had been reopened by DAR, who looked on while the other employee performed work on the pipes.  “The evidence was clear that DAR failed to manage safety on its worksite,” Clark commented. “There was no question defendants ignored safety regulations and jeopardized the lives of workers to maximize profits,” he added. According to Clark, “This was an excellent jury which took its critically important role in our justice system seriously. By holding DAR accountable, the jury has made our community safer.”

Plaintiff was not provided medical treatment for three days after the incident and was ultimately diagnosed with pelvic fractures, back, shoulder and urological injuries. He later underwent a hip replacement surgery and has been out of work since the incident. Defendant contested the nature and extent of plaintiff’s injuries, denied that the hip replacement was due to the incident and maintained that he is employable. Clark countered that defendant’s medical expert, Edward M. Decter, MD, earned $2,036,000 from 2008-2010 giving similar testimony in other cases. Clark also showed at trial that Decter and/or his wife own over $23,000,000 of stock in ExamWorks, Inc. a publicly traded company that holds itself out as a leading provider of defense medical exams for the insurance industry.

The case was tried over a seven day period in Essex County Superior Court before the Honorable Thomas Vena, JSC. The verdict was rendered on February 4, 2011 in the amount of $892,000. With mandatory prejudgment interest the total judgment is in excess of $1.1 million. The insurance company for DAR hired lawyers to defend it and will be responsible to pay.

“Companies like DAR should not be allowed to needlessly endanger the health of workers as was done in this case,” said Clark. “The federal regulations were meant to protect the lives of workers and the general public that comes in or near constructions sites. When contractors like DAR fail to follow the OSHA law, our society as a whole suffers. This was a just result.”

The facts of the case as related here are a matter of public record.  Defendants appealed the case all the way to the New Jersey Supreme Court, where Clark prevailed and was successful in new law being created making it harder to blame the worker in cases like this.  Fernandes v. DAR, 222 N.J. 390 (2015)

Gerald H. Clark, Esquire is a New Jersey personal injury and accident lawyer. He is Certified by the Supreme Court of New Jersey as a Civil Trial Attorney, a distinction held by less than 2% of New Jersey attorneys. He represents people who have been injured by corporations that break public safety rules. Contact us today if you are looking for a lawyer to represent you for getting hurt at work.