Worker rights attorney Gerald H. Clark recovered over $3 million for a 48 year old construction worker injured on a Turnpike resurfacing project. The worker was an experienced union laborer. He was a member of the Laborers International Union of North America, Local 472 and an employee of Conti Enterprises. He was working the overnight shift on December 10, 2013 on a Turnpike resurfacing project near Hackensack, New Jersey. As he was picking up construction debris, a truck driven by his foreman backed up over him. The truck had no backup alarm nor camera, contrary to OSHA safety rules. 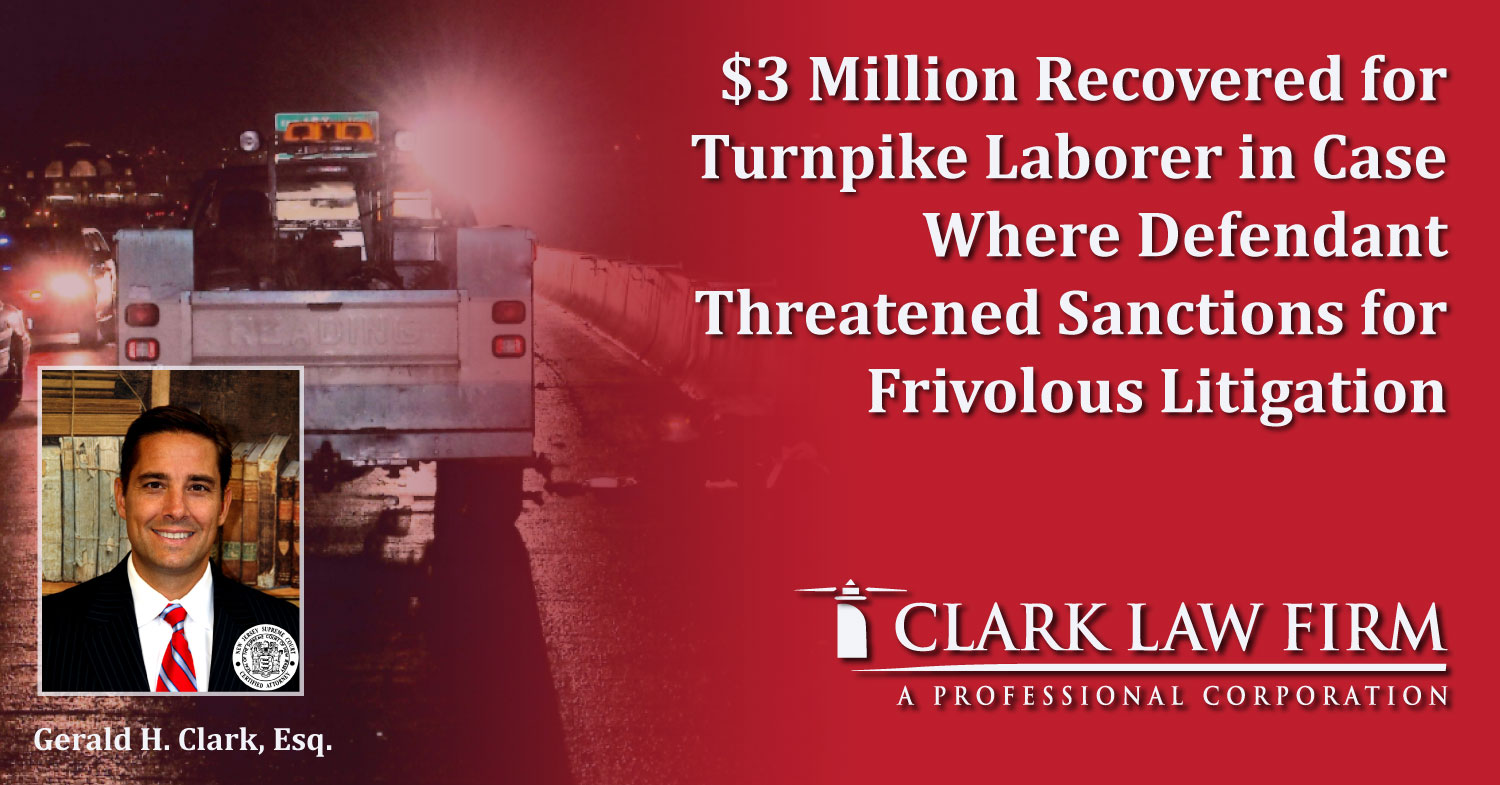 For over four years Attorneys Gerald Clark and Mark Morris, and the rest of the Clark Law team fought for this worker against powerful billion dollar corporations and insurance companies. Early on Jacobs wrote Clark Law Firm a letter threatening that if they did not withdraw the case, they would go after the law firm and injured worker for “frivolous litigation.” You can see the letter for yourself here. This just made Clark and his team work even harder.

Clark and his team reviewed tens of thousands of documents, took numerous depositions, hired many experts and wrote hundreds of pages of legal briefing. Defendants filed several motions to have the case thrown out of Court. Clark won them all, took the case to trial in 2019, achieved a $2.579 million verdict and ultimately recovered over three million dollars for this deserving worker.

In this case Jacobs hired a courtroom expert who wrote a report saying the truck did not need a backup alarm and it would not do any good. Yet through diligent investigation, we found this very same “expert” himself had a backup alarm installed on virtually the very same truck he owned. He also said it had a perfectly clear and unobstructed view out the back; a clear fabrication.

At trial Jacobs told the jury they had no responsibility for safety and could not tell Conti what to do. They also said they were not on site at the time of the incident and that their expert would testify the truck did not need a backup alarm. At trial Clark Law Firm proved it was all false. Numerous documents and testimony proved they were in charge of safety. The documents showed they could tell Conti what to do and we even uncovered a memo where they actually required Conti to have a backup alarm on another vehicle. They apparently forgot at trial that years earlier they had sworn under oath they were on site and witnessed the incident. And despite telling the jury in opening statements what their expert would say, they didn’t even bother calling him to the stand. This is the closing slide we used to make that point.

Jacobs and their insurance company also hired courtroom defense doctors to testify the worker never suffered any serious or permanent injuries and he was a faker. One particular expert, Keith Benoff, PhD said the worker was completely “alert and oriented” at all times in the hospital with a Glasgow Coma Scale of 15, and the records showed his Glasgow scores dropped as low as 8, which indicates “severe brain injury.”

In the end, Clark Law Firm achieved a recovery in excess of $3 million, including a substantial jury verdict against a defendant that threatened to have the law firm and this worker fined large sums of money for filing the case.

If you or a loved one have been hurt at work, contact the Clark Law Firm today. We can represent you on contingency, so any fee you pay comes out of any recovery we get you. The lawyer you choose makes a huge difference.