A construction worker client of Gerald Clark was working for a framing sub-contractor on a Kara Homes, Inc. construction project in Monroe Township, N.J. The worker, who had no safety training, set up a ten foot strait ladder at 45 degree angle to install joist hanger brackets to the underside of the second floor. The ladder slipped out and fell, causing him to suffer ankle fracture injuries requiring internal fixation surgery. Plaintiff brought an action for personal injury compensation against Kara Homes, Inc, the general contractor on the project, and JM Framing Corporation, the sub-contractor that hired his employer. 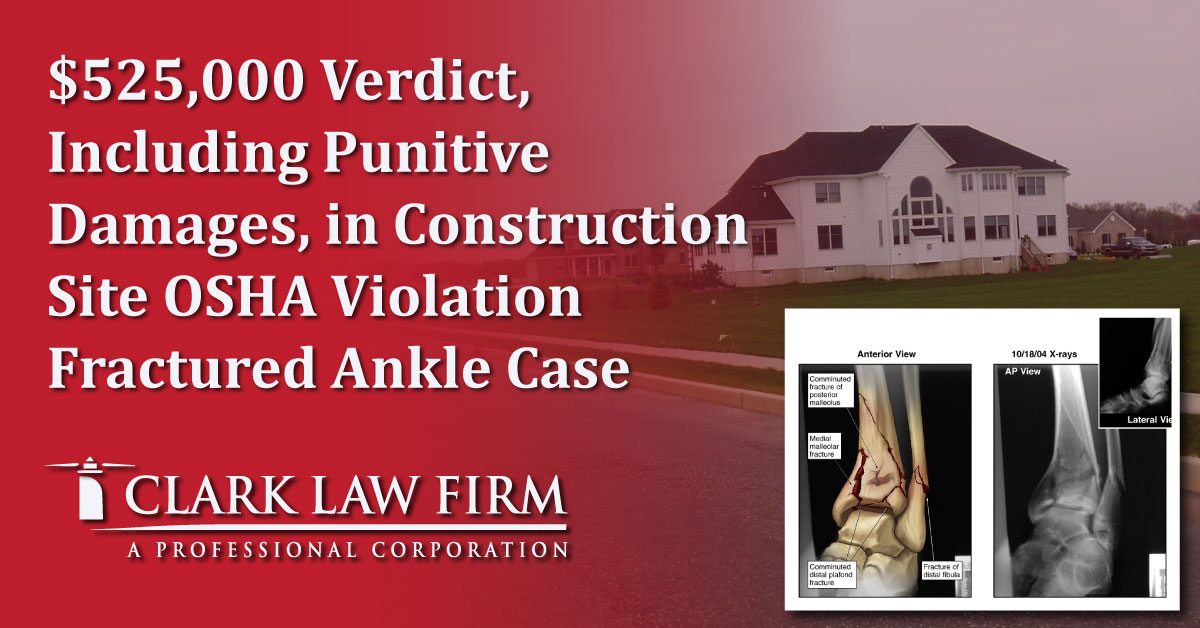 The case claimed Kara Homes and JM Framing were negligent in failing to manage safety on the worksite and ignoring their duties under the federal workplace safety regulations known as OSHA. The suit proved the workers were not properly trained or supervised and that they were not provided the right equipment to safely do their work. At one point the worker complained the ladder was not safe for the work, but his boss told him to do his job with the equipment available to him (or find another job).

Defendants claimed the worker himself was negligent in choosing to use the wrong ladder and setting the ladder up at a 45 degree angle. The worker explained that he had no real choice in the matter and that he set up the ladder in the safest possible position. He explained that he had no better ladder available and if he refused to do his assigned tasks with what he had, he could be fired. He explained the workers were under intense pressure by Kara Homes and JM Framing to complete their work quickly.

Defendants also relied on the fact that plaintiff was a non-English speaking immigrant from South America. Plaintiff’s counsel argued such was irrelevant to the issues of liability and damages and that contractors like Kara Homes and JM Framing routinely rely on immigrant labor. Plaintiff’s counsel also argued defendants sought to exploit their status to avoid their duties for construction site safety under the federal OSHA regulations.

Attorney Gerald Clark tried the case alone against powerful forces over the course of seven days before a Middlesex County Superior Court judge. The compensatory damages phase took place from March 10th to March 17th and the punitive damages trial took place on March 31st, The eight person jury awarded $500,000 for pain and suffering compensation and $15,000 for lost wages. No medical bill claims were submitted to the jury.

The jury also found defendant JM Framing Corporation’s failure to follow the OSHA regulations was willful, wanton or with reckless disregard for plaintiff’s safety. JM Framing offered evidence that it was financially insolvent and was fined $10,000. Since the Kara Hornes Corporation was in bankruptcy, plaintiff was limited to their insurance coverage and was not permitted to pursue any punitive damages claim against them.

Clark Law Firm is an experienced personal injury law firm representing people who get hurt at work. They get excellent results. Contact them today if you are looking for a good accident case lawyer with a proven record of winning.  You want a top personal injury law firm that actually takes cases to trial.  Insurance companies will pay more in settlements if they know your lawyer is not afraid to take a case to verdict.