This was a fall down case involving a defective staircase. On May 4, 2018, while walking out of Marina Grille in Belmar, a woman in her mid 50s fell down on a poorly marked set of steps. There were yellow visual contrast lines painted on every step except the top landing. This created an optical illusion, which made the first step down appear that it was part of the top landing. This violated three safety standards which require the nosing of the landing to have a contrast marking with the first step to prevent the very thing that happened here- misstepping while descending because the top landing blends in and looks like it is part of the first step. These standards are from the American National Standards Institute (ANSI), American Society for Testing and Materials (ASTM) and the New Jersey Adopted International Building Code. 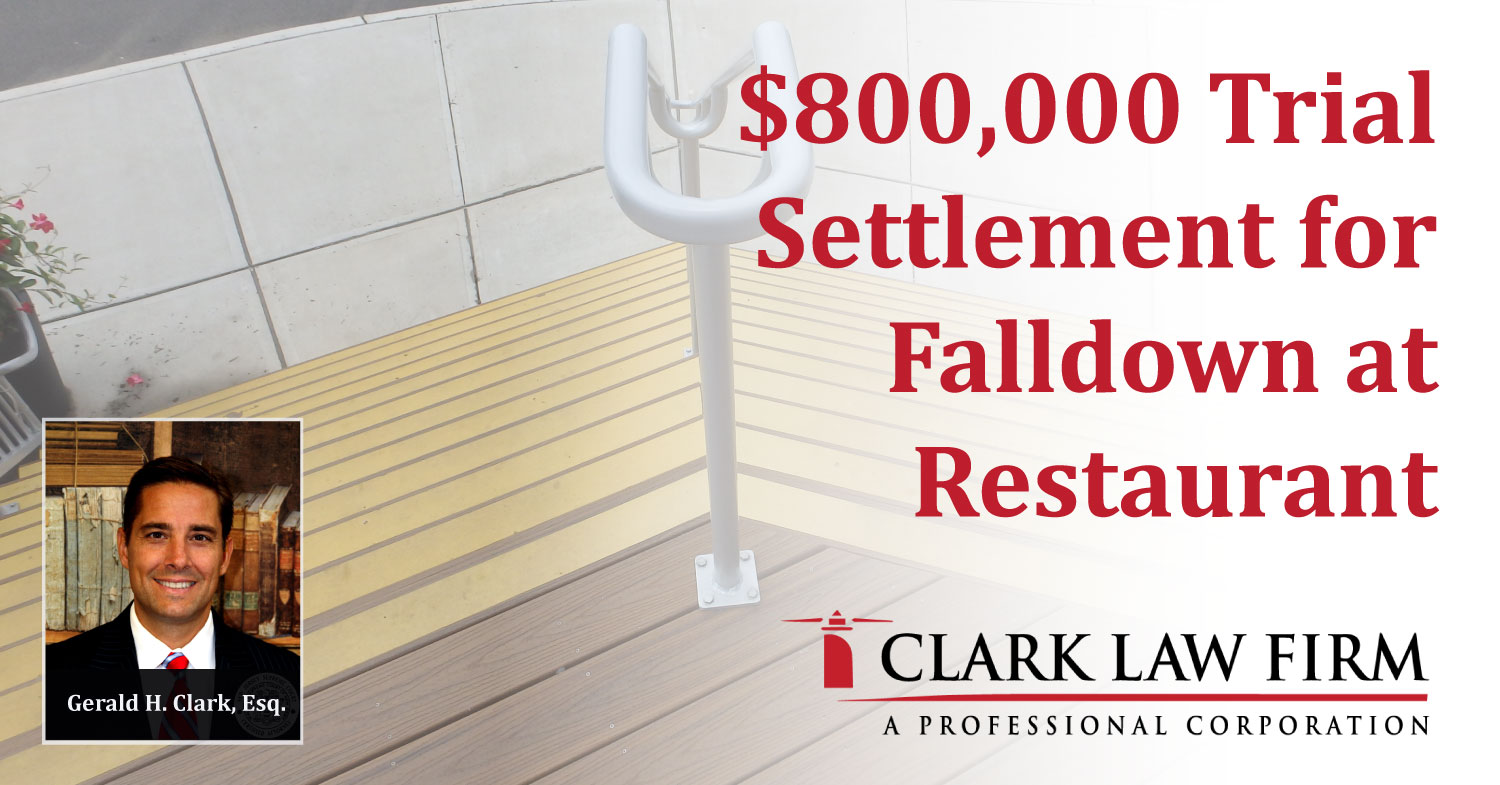 Defendant’s liability expert said there was nothing unsafe about the stairs. But afterwards in the litigation, the Marina Grill fixed the condition and added a warning strip on the top step as recommended by plaintiff’s expert.

The Clark Law Firm client who fell broke her wrist, bruised her hip contusion and hurt her back.  She had surgery on the wrist, an injection in her back and physical therapy.  She missed 2 months from work and had a $26,000 medical lien.

The case was filed in Middlesex County Superior Court on May 21, 2019 by Gerald H. Clark, Esq. of the Clark Law Firm in Belmar, captioned Meaghan McKenna v. Marina Grille, Docket No.: MID-L-3926-19.  After a very long and hard fought litigation process, the case was assigned to a jury trial on April 11, 2022 in the Middlesex County Superior Court. Jury selection took place over a day and a half with the lawyers in the courtroom and the jury pool remote. Once selected, the jury came in live.

The case settled for a total of $800,000 just before opening statements. The settlement is to be paid by Philadelphia Insurance Company, the carrier for Chefs International, Inc. trading as Marina Grill. The case was prepared for trial by Gerald H. Clark, Esq. with the assistance of Jake Antonaccio, Esq. and paralegal Lori Gordon of the Clark Law Firm, PC in Belmar. Gerald Clark commented, “This is a favorable result after a hard fought litigation. We are pleased to have obtained a good recovery for our client, and hopefully prevented this from happening to others by getting them to fix the hazard.”