Jersey City, New Jersey — On February 27, 2020 a construction worker was replacing a water pipe in the parking lot of Summit Plaza in Jersey City when the the trench he was working in suddenly collapsed.  The incident occurred around 9:30am with the 35-year-old worker being buried for over five hours.

According to director of Office of Emergency Management, Greg Kierce, construction workers were replacing the water main that goes into the Society Hill Housing Development, which is behind a shopping center where the incident occurred. His body was partially buried and he was pronounced dead at the scene. His body was recovered nearly five hours later at 2:15 p.m. The fire department responded to shore up the hole and to remove the victim. 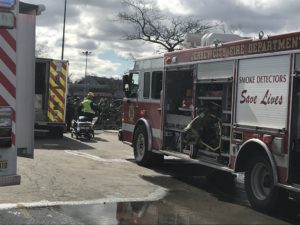 Jersey City Fire Department on the scene of the accident. (Photo: John Bathke)

OSHA had responded to the accident and the cause of the collapse is under investigation.  It is currently unknown if the windy or rainy weather played a role. “It’s down approximately four feet, you know, we’ve had rain and mud and dirt. You know, I guess when you open these things up you have to be careful about the stability of the ground and things like that. Right now, all of that is speculative, what occurred,” Kierce said.

Our thoughts and prayers are with the victim’s family during this difficult time.

Trench collapse cases are by far one of the most deadly accidents that can happen on a job site. Due to the risk involved with the excavating of trenches OSHA provides strict guidelines for digging, inspecting and working with trenches. Those guidelines indicate trenches dug deeper then five feet require trench protection before anyone is allowed to work inside of them. Trenches dug below twenty feet require a professional engineer to approve of the trench before work can begin. OSHA also requires a “competent person” to inspect the trench everyday before work begins to ensure the elimination of excavation hazards. Finally, OSHA requires ladders within 25 feet of all workers at all times in any trench under 4 feet. (Soure: OSHA Website)

Failure to comply with these standards can result in workers being needlessly killed or injured. Clark Law Firm has a long history of bringing justice to workers who’s employers refused to provide them with basic protection and seek out their best interest including in trench collapse cases such as the following.

Mr. Fernandes was a 57 year old plumber who was pinned in a trench for 20 minutes and suffered pelvic fractures, he won $1.1 million in a jury trial award in Essex Country Superior Court.

On October 9, 2004 Rolondo Fernandes was working as a plumbing laborer on a $700,000 residential construction project in Warren, New Jersey. The general contractor on the project was DAR Construction Company (“DAR”). DAR hired plaintiff’s employer, C. Freitas Plumbing to install a 700 foot sewer line from the street to the house. This required the digging of a 700 foot trench that varied in depth from 4 feet to 8 feet. On the last day of the project, plaintiff was in a 6 foot trench when it suddenly and without warning collapsed, burying Fernandes to his waist. He was pinned for 20 minutes.