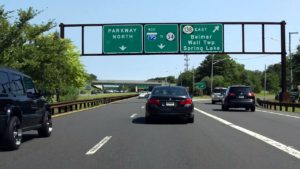 A fatal accident occurred on the Garden State Parkway near mile marker 99.9 in Wall. The crash occurred in the northbound lanes near the Monmouth Service Area. Patrick A. Elhalaka, 30, of Port Reading, New Jersey was traveling on Garden State Parkway  when he was involved in a fatal car accident with Tresy M. Thomas of Bayville, New Jersey according to Lt. Schafer of the New Jersey State Police said the accident occurred on April 6, 2020 at approximately 10:24am. The accident occurred between a gray BMW and a red Toyota. Mr. Elhalaka was pronounced dead at the scene of the accident while Ms. Thomas was taken to a local hospital for her injuries. The investigation into the crash is still ongoing. (via APP)