Clark Law Firm won a $500,000 settlement for a mom in her early 40s who fell on ice and snow at a New Jersey strip mall.  The woman was walking out of a restaurant in Morris County N.J. one afternoon in January when she fell down on ice and snow in the parking lot.  She broke her ankle and needed surgery.

Under the law, commercial property owners have to clear ice and snow after a storm.  If they don’t, and people get hurt, they can be liable in a court case.  Most businesses have insurance for this kind of thing.  The insurance company will hire lawyers to fight the case and pay out any settlement.  Insurance companies make it really hard to win.  They hire courtroom doctors to say the plaintiff is exaggerating and faking the injuries.  This is why it is really important to hire a good lawyer that has a track record of winning and not settling for cheap. 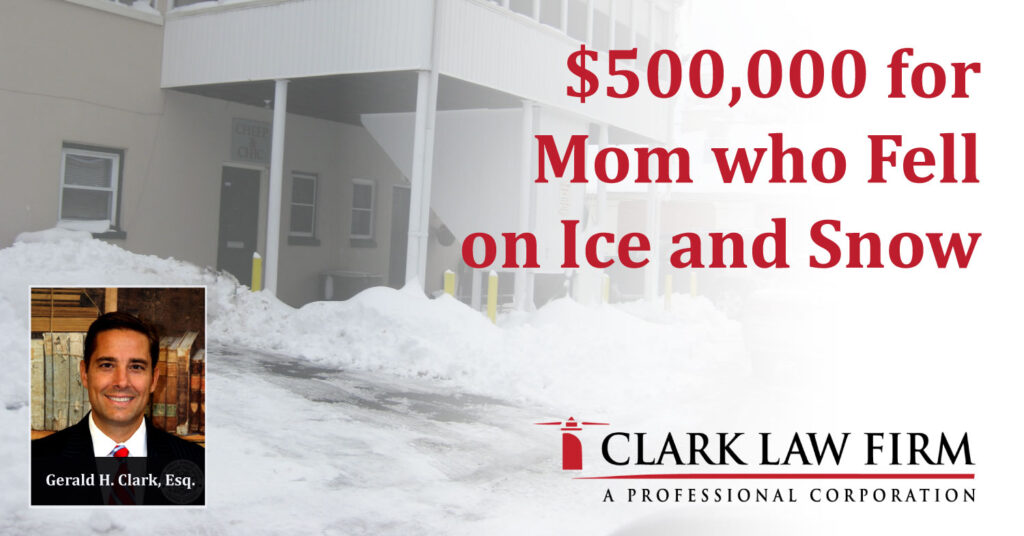 In this case the pathway she was walking on was shoveled, but there was left a heavy layer of ice.  The landlord was responsible to clear the area, but did not put down salt.  They also did not have the snow removal company come back as the snow melted and then refroze, making it really slippery.   There were leaking gutters which made the situation even worse.

The insurance company refused to respond to the claim (as insurance companies often do), so Clark Law Firm was forced to bring the matter to court.  They fought the insurance company for four years.  They were hoping the law firm would accept their low ball settlement offers as many who are afraid to go to trial often do.  But Clark Law Firm put the money, resources and resolve into the case and was fully ready for trial.  They achieved a substantial $500,000 award for this deserving mom.

Clark Law Firm handles a lot of ice and snow fall down cases.  They get some of the best personal injury case results in New Jersey.  They are available to speak with you 24/7. Contact us today.