I have been involved in thousands of injury cases in my 22 years of practice and have yet to see an “independent” medical examination, aka “IME.” Instead I typically see a defense medical exam by an insurance doctor who is paid six or seven figures each year to do these exams. The doctor is not there to find the truth, but to serve its clients; the insurance company and defense law firm. These exams are the farthest thing from independent. These doctors typically downplay the injury, suggest the plaintiff is exaggerating and misstate what happened at the exam. As a matter of fundamental fairness, the injured plaintiff should be permitted to bring a nurse to the defense medical exam to observe, take notes and record it. 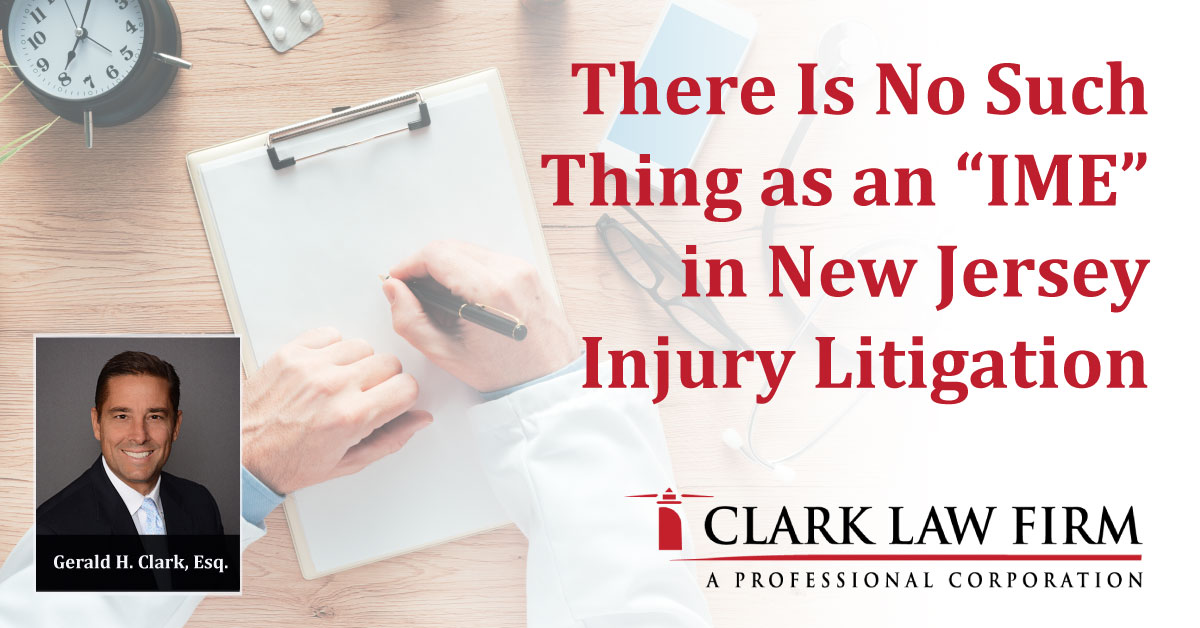 In personal injury lawsuits there is almost always an insurance company that controls the defense. Under New Jersey Court Rule 4:19, “Physical And Mental Examination Of Persons”, the insurance company or defense counsel will arrange to have the plaintiff examined by their doctor. Defense attorneys call this an “IME,” but there is nothing independent about it. For starters, Rule 4:19 states in pertinent part, “In an action in which a claim is asserted by a party for personal injuries or in which the mental or physical condition of a party is in controversy, the adverse party may require the [plaintiff] to submit to a physical or mental examination…” (underline added) The defense medical exam (“DME”) is by rule, adversarial.

There are two published New Jersey state appellate level opinions which speak to this issue, B.D. v. Carley, 307 N.J. Super. 259 (App. Div. 1998) and DiFiore v. Pezic, 2022 N.J. Super. LEXIS 58 (App. Div. May 3, 2022) (Approved for Publication) BD v. Carley was an interlocutory appeal from an order that barred the plaintiff from recording a psychological defense exam. In reversing and permitting the recording, the Appellate Division noted, “‘A physician selected by defendant to examine plaintiff is not necessarily a disinterested, impartial medical expert, indifferent to the conflicting interests of the parties.’” BD v. Carley at 261-62, citing, Jakubowski v. Lengen, 450 N.Y.S.2d 612, 614 (1982). The court also held that because this is a litigation exam, not treatment, fairness dictated plaintiff be permitted to record it. BD v. Carley at 262.

DiFiore v. Pezic resolved three separate appeals, one involving orthopedic and two neuropsychological defense exams. The DiFiore court concluded that if there is a dispute, there has to be motion practice on a case by case basis, “with no absolute prohibitions or entitlements.” DiFiore v. Pezic, 2022 N.J. Super. LEXIS at 5. The DiFiore court stated that “both sides of the debate tend to overstate” the nature of the defense medical exam. The court found the DME is not an adversarial proceeding designed to disprove claims of injury and show the plaintiff is an exaggerator. Instead it “is a professional assessment that must adhere to the standards of the examiner’s profession.” Id. at 27. “Nor is the DME, as defendants tend to portray it, always a purely objective exercise… The examiners tend to be hired repeatedly by insurance companies and defense firms, with the expectation the examiners will assist the defense [and] are more skeptical… Nevertheless…they are expected to adhere to their professional standards and their duties of candor to the court.” DiFiore at 27-28.

I and fellow members of the plaintiffs’ bar can offer countless examples of defense medical experts giving dishonest testimony, including about what happened at the defense medical exam. In 20 years of practice I am aware of only one instance of professional discipline for it.

The DME industry is big business. Cross examination I did in a 2015 trial revealed the defense doctor had a $23 million stake in the company that arranged the defense medical exam. The doctor admitted the better the company services its clients, the insurance industry, the better he does. He also admitted to making over $2,036,000 a year doing defense exams and could not recall a single instance where he agreed with the treating physician that the spinal injury was caused by the accident.

Since about 2010 our law firm has been consistently sending a nurse to DMEs. In all those years there has not been a single instance of the nurse “interfering” in the exam. DME doctors do not like being watched. But with court after court relying on BD v. Carley to permit it, they have learned to live with it.

Time and again the nurses show defense doctors falsify what happened at the exam. For example, they inflate the time they spent in the exam and falsely report the plaintiff performed physical tests with full range of motion and no pain. They may also falsely say the plaintiff complained of pain “all over” to make it sound like they are exaggerating. Here is one example of a nurse responding to false DME testimony at a trial I recently did:

Q.    [Defense doctor] testified that when he touched the shoulder, he complained of pain all over the shoulder. Did that actually happen at the exam?

Q.   Describe what happened at the exam. Where did he touch the shoulder and what actually happened on that?

A.   He touched it right on his deltoid area, and that’s where it hurt. It wasn’t all over. He specifically said the proximal area.

Q.   And [defense doctor] also testified that wherever you touched him on the body, he said, “oh, that hurts, pain here, pain there.” Did that ever happen at the exam?

Q.   Okay. And did [plaintiff] ever complain of pain all over his body, diffuse pain?

This kind of testimony is critical. Permitting recording is even better. Otherwise it becomes a “he said, she said” situation; worse, it is a highly educated doctor the defense calls “independent,” versus a downtrodden plaintiff looking for a money recovery.

Other commentators have noted there is simply nothing independent about these exams.

There is no bigger joke than the defense medical exam. I do not even have to read the reports when my clients attend them. Whether the plaintiffs are sixteen or ninety, these exams almost always conclude that they’re suffering from a preexisting condition of some sort…

[W]hen there is no emergency room visit, the defense doctors will claim that because the plaintiff didn’t experience any immediate pain and didn’t visit the emergency room, she must not have been injured. However, if you collect all of these experts’ reports, you’ll discover that even when there is emergency room treatment, they will opine that it is of no significance…

I inform my clients that this is what they should expect from a defense medical exam. I tell them not to exaggerate and remember this guy is not your friend. He will typically be very nice to you, try to make you relaxed, agree that you are injured, and then write his report that you are a liar, a malingerer, and a fraud.

In one particular case, a client tape-recorded the entire exam. It lasted ninety seconds. When the doctor testified that he had examined them for fifteen or twenty minutes he was crucified on the stand with the ninety-seconds audiotape…

…When your client does not complain of pain, the test is normal. The client cannot win. …When a complaint of tenderness or pain is elicited, the doctor quickly dismisses it as, “oh that is a subjective complaint.”

Why do many DMEs behave in a disturbed manner? Why do they lie so often and so easily?

A friend attended a DME conference where the audience was asked, “How many times do you think you can reach a conclusion contrary to the interests of the insurance industry and still be used as an expert for the carriers?” The audience was unanimous: “Twice.” They replied.

Two times a DME can be honest and, after that, he can forget those tasty referrals resulting in big fees– referrals that don’t involve haggling with insurance companies or Medicare, fighting over down-coding of bills, or treatment of unhappy patients; referrals that have no potential for malpractice suits because the doctor is not a treating doctor. It is just too tempting, perhaps, even for someone who genuinely wants, or even needs, to be honest.”

Sims, Exposing Deceptive Defense Doctors, James Publishing, Rev. 2, 2011, §1:02. These are adversarial proceedings and the plaintiff should be permitted to bring a nurse to observe and record the exam. Indeed, the DiFiore court found, “[W]e cannot always depend on the examinee…to rebut…the examiner’s testimony….A recording or a third party observer might furnish such evidence.” DiFiore at 30.

In my view DiFiore court erred in finding, “despite contrary language in Carley, we hold that, going forward, it shall be the plaintiff’s burden to justify to the court that third-party presence or recording, or both, is appropriate for a DME in a particular case, absent consent to those conditions.  the burden should be placed on the plaintiff, rather than the defense, to justify special conditions such as third-party observation or recording.” DiFiore at 41. The Supreme Court should intervene in this issue, either by granting certiorari in DiFiore to resolve this appellate split, or through its rule making authority.

A trial is a search for the truth. Cameras are ubiquitous in 2022. Police have to wear body cams, court proceedings are on the record, and most commercial establishments have surveillance cameras. There is no reason it should be any different when it comes to a litigation event as consequential as a defense medical exam where millions of dollars and the well being of vulnerable people are at stake. Leaving an unsophisticated plaintiff alone with a highly educated and paid medical doctor and simply trusting he will be honest about it all is not realistic and would result in a stark unfairness at trial. Switching the burden to the plaintiff to show the need for an observer and recording is not reflective of the reality of the situation and will cause unnecessary motion practice.

Indeed, there is no such thing as an IME; unless it stands for “insurance” medical exam. Permitting a nurse to observe, take notes and record the defense exam is a common sense and fair measure.