Three killed in fiery crash on Route 22 in Newark 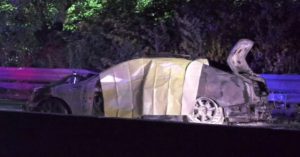 Two of the passengers, Taylor Hill and Kamal Johnson immediately died in the collision, the other three occupants were rushed to University Hospital. A third passenger Nashawn Brooks passed away the next day. The driver and another passenger remain at University Hospital in critical condition.

Gov. Phil Murphy said at a press conference Wednesday that the victims were on their way back from Point Pleasant Beach, where over 1,000 people were gathered on the beach on Tuesday night.

Video from the scene showed a completely burned car on the highway with a yellow tarp covering the seats of the car as law enforcement assessed the damage.

The investigation is active and ongoing, but authorities say the preliminary investigation indicates that speed does not appear to be a factor in the crash.

The Essex County Prosecutor’s Office will investigate the crash. (via ABC7)