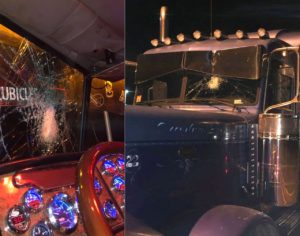 While driving on the New Jersey Turnpike on March 26, 2020 Dennis Gilbert’s 2005 Peterbilt Truck was struck by an unknown object. Dennis stated the impact was so great he thought he has hit another car. It turns out 3 teenagers had tossed a cinderblock off an overpass onto Gilbert’s truck driving on the freeway below.

The cinderblock directly impacted Dennis Gilbert’s front visor before falling onto his windshield. He said that if his truck had not been outfitted with that medal visor the cinderblock would have come directly through his windshield and killed him. Despite escaping death Dennis Gilbert still sustained serious injuries from the windshield shattering sending glass into his eyes. Another truck driver who was also hit by the cinderblock when it ricocheted off of Gilbert’s truck stopped and helped the disoriented and temporarily blinded driver get medical attention. “I asked, ‘Did I kill somebody?’” The other driver explained that he saw a cinderblock hanging from the overpass by an orange and black rope just before the impact. As he waited for help, the pain from the glass was excruciating. “I was trying not to blink,” he said. “It felt like there were razor blades between my eyelids and my eyes. It was very painful.” Gilbert said. He was taken to Crozer-Chester Medical Center in Upland, Pennsylvania.

In addition to this horrible situation, Dennis Gilbert also had another fear on his mind, Coronavirus. He had very serious apprehensions about going to the emergency room given the ongoing pandemic. The Crozer-Chester Medical Center had set up a separate hospital for those with non-Coronavirus related injuries. He was taken there and most of the glass was removed from his eyes, a followup appointment with an Ophthalmologist removed the rest. Despite his harrowing experience Mr. Gilbert is expected to make a full recovery.