Faulty Knee Replacements: Are You at Risk? 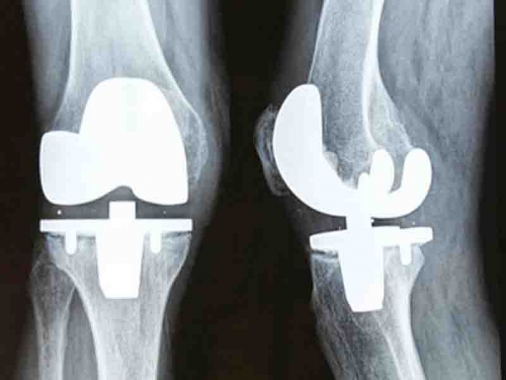 The recall began March 12, 2015, and is entirely voluntary. The recall that was issued is for nearly 12,000 knee components after an increase in complaints of premature loosening and separation of the metal plates from the bone. This loosening can cause severe pain, as well as additional surgery to correct the issue. The Persona Knee has been distributed by Zimmer for the past three years in at least 25 states, including New Jersey, and at 13 major Veterans’ Administration medical centers across the United States. The Persona Knee has also been sold internationally. The recall has prompted the Food and Drug Administration to issue a warning that the implants can loosen earlier than expected, causing complications. The FDA has stated that all sizes of the affected devices are being removed from distribution.  The specific recall that the FDA has issued is used when a product can cause temporary or medically reversible adverse health consequences. The FDA issued Urgent Medical Device Recall notices to affected distributors, hospitals, and surgeons. Zimmer has reported approximately six complaints per 1,000 devices, which is higher than the rate of complaints for similar implants.

Originally, the Persona Knee was marketed in 2012 as the most clinically successful knee replacement ever, with an emphasis on how personalized the replacement was.   The personalization involved with this implant was introduced as a new era of personalization for artificial knee implants. The system was marketed aggressively as providing a superior anatomical fit, despite the fact that there were some major design defects making the implant dangerous. The device was made to closely mimic the natural action of the knee, and was designed for an active and younger demographic. The Persona Knee implant was approved using the FDA’s 510(k) shortcut process, which allows manufacturers to claim that a new device is similar to other devices on the market and allows those manufacturers to forgo costly clinical trials. Because of this, the Persona Knee was never tested in humans prior to sale.

Recipients of the Persona Knee have experienced additional problems and in some cases, have needed corrective surgery. Since this product has only been on the market for three years, the fact that there are already a large number of complaints is a serious problem. About a third of the complaints reported have involved patients who had gaps in their knees and/or needed revision surgery to correct premature loosening of the implant. The Persona Knee can cause large gaps between the knee replacement components or between the components and the bone. These gaps are called radiolucent lines, and can cause fluid, tissue, or debris to lodge in the cracks, which can lead to bone damage or implant failure. These radiolucent lines are dark lines that can be detected on an x-ray, and are a symptom of a poorly fixated knee implant. Loose implants can also cause swelling and damage to tissues and bones.

While it is quite possible that you may have a claim against the manufacturer of the replacement, it is necessary to consider several other factors, such as how much time has passed since the original knee replacement. Successful knee replacements should last between fifteen to twenty years. If you have needed revision surgery before that expected life span, it is possible that your device failed prematurely and did not function as it should have. Some symptoms of faulty knee replacements include knee pain, loosening of the knee replacement, poor fixation, knee replacement failure, and decreased mobility. It is important to identify whether your implant is a Zimmer Persona Knee system, as delay in identifying a failed device can result in additional complications, while identifying the failure sooner will allow for preventive measures to be taken.

If you or a loved one has had a knee replacement with parts manufactured by Zimmer, it is important you determine whether the replacement is the Persona Knee. If so, you may be able to take legal action against Zimmer for the faulty replacement and the complications that it may cause. If you do not know the manufacturer or type of device that was implanted, your hospital records will have all of that information.

Please do not hesitate to contact the Clark Law Firm, P.C., as our personal injury attorneys are experienced in bringing forth successful claims regarding faulty products. Depending on the specific details of your case, you may be able to be compensated for medical expenses, surgeries, lost wages, and pain and suffering. We will be happy to determine whether you have a claim that can be brought against Zimmer and to evaluate your case.