$408,000 Verdict for Golfer Injured in Golf Course Fall Down 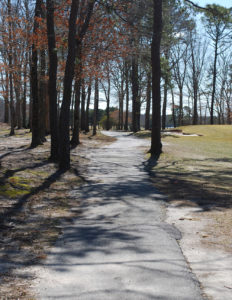 On September 11, 2012, a Clark Law Firm client, 79 years old, was playing golf at a country club in Ocean County, New Jersey.  The client, who had a prior disability which included a leg fused at both the knee and the hip, enjoyed playing golf at least twice a week for many years prior and lived in the country club community, where he was a member.  The weather was clear and dry and the client decided to sit out the final 9-holes after getting tired.  He was playing golf with his usual golf mates, one of whom drove the golf cart in which the client was a passenger.  The golf cart was eventually parked on the golf cart path at the 17th hole.  The client decided to get out of the golf cart with the intention of walking to the back of the cart to get his water bottle.  After exiting the golf cart, the asphalt on the edge of the path crumbled under the client’s foot causing him to fall to the ground.

Plaintiff’s counsel William S. Peck, Esq. of the Clark Law Firm, PC in Belmar, New Jersey, alleged that as a result of this incident, the client sustained injuries to his lower back and left arm.  More specifically, the client sustained a left humerus fracture and a lumbar (L1) fracture, both of which required open reduction and internal fixation with placement of hardware.  Following rehabilitation, the client developed healing issues with the surgical wound on his lower back which was diagnosed as a MRSA infection requiring antibiotic therapy.  At the time of the incident, the client was retired and enjoying an active life with his wife and family.  Following the injury the client was limited in his physical activity and could no longer play golf.  The client passed away on July 4, 2015 due to unrelated causes. 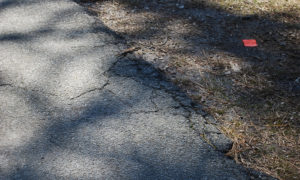 Plaintiff’s counsel alleged that the design and condition of the cart path at the country club was dangerous.  There were various accounts as to how the client was injured.  Plaintiff’s liability expert opined that the deteriorated, broken, ragged, uneven, and structurally unsound asphalt pathway surface encountered by the client was improperly and defectively designed, constructed / installed and maintained.  As always, the case was hard fought by the insurance company at trial.  Defendant’s liability expert opined that plaintiff did not fall down at the location alleged, and even if he did, the asphalt surface was not defective or poorly maintained.  Defendant’s liability expert further opined that the country club had no notice of any dangerous condition at that location on the 17th hole.  Insurance companies in fall down personal injury cases regularly hire these kind of liability experts who only consider testimony and underlying facts that favor their defense position, without consideration of all the facts presented.

A trial was held before the Honorable Mark A. Troncone at the Ocean County Superior Court from December 12th through December 19th, 2016.  The client’s estate was represented at trial by William S. Peck, Esq. and Mark W. Morris, Esq. of the Clark Law Firm, PC.  On December 19th, the jury returned a verdict finding that the defendant country club was negligent, and that defendant’s negligence was the proximate cause of the client’s injuries.  The jury further found that the client was not comparatively negligent.  A total of $408,000 was awarded, not including pre and post judgment interest.  After adding in pre and post judgment interest, the total recovery was $436,395.12.